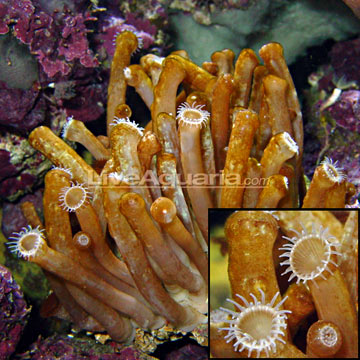 Snake Polyps are colony polyps with very long tubular bases with white feathery ends. They resemble many species of polyps in the Protopalythoa genus. Snake Polyps are photosynthetic but will normally only show their feathery polyps during nighttime hours when the lights are off. They make an interesting addition to a reef aquarium and will add a diversity of form.

Snake Polyps are peaceful in nature, but space between their own colony and other corals and invertebrates should be provided to protect them. They require a moderate to high light level combined with a medium water movement within the aquarium. For continued good health, they also require the addition of iodine and other trace elements to the water.

They will reproduce in the reef aquarium on their own by budding (splitting off a portion of their base or mouth), if adequate water quality parameters are maintained.