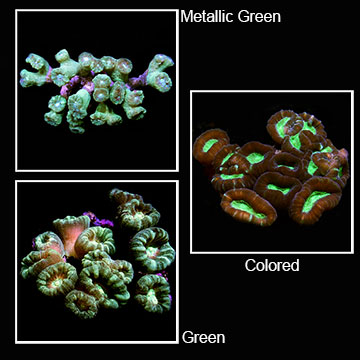 The Trumpet Coral is a large polyp stony (LPS) coral often referred to as the Trumpet, Torch, Candy, or Bullseye Coral. The skeleton of this species is branched out of a central base, and terminates into a large head that resembles a trumpet. A large fleshy polyp covers the each head of the colony, and the polyps are florescent green in this species. The Trumpet Coral is able to expand its fleshy polyps to many times its skeleton size giving the coral a similar appearance when compared to a closed brain coral.

It is hardy and a relatively peaceful reef inhabitant, with very short sweeper tentacles. It requires moderate lighting and moderate water movement, along with the addition of calcium, strontium, and other trace elements to the water. This and other species of Caulastrea sp. can be sensitive to metal halide lighting, so take time in acclimating these corals to this type of lighting. Simply place the coral low in the aquarium for a few weeks until it opens fully and slowly move the colony to the desired location.

It will benefit from additional food fed weekly in the form of chopped meaty items, baby brine shrimp or zooplankton.

Write a Testimonial | Ask Customer Service
Michael Birchell Carlsbad , NM
This is a cool coral. Under actinic lighting it will glow bright green. Easy to care for, and grow at a moderate speed. I would recommend it to anyone, that wants a great coral that is peaceful.
1-1 of 1 testimonials