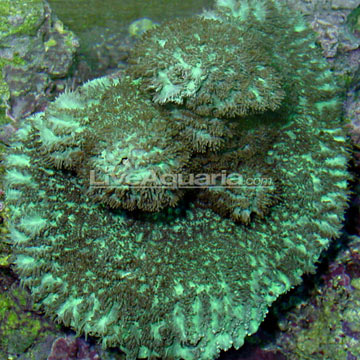 The Encrusting Horn Coral is a SPS coral often referred to as Knob, Velvet Horn, or Branch Coral. The most common form is green with darker green polyps, but less commonly will be cream in coloration with neon green polyps. This species is encrusting, and will grow over the adjacent rockwork. This species may also develop horn-like branches, reaching out into the water column. Hydnophora sp. corals have the ability to swell their tissue, giving the coral an inflated and fuzzy appearance.

Provide the Encrusting Horn coral with moderate to strong lighting and a moderate water flow. They are relatively hardy in an established reef aquarium and can be aggressive. They have the ability to extend short sweeper tentacles, which can contain a powerful sting that would harm corals that are in close proximity. Therefore, provide enough space between this and other corals. For continued good health, it will also require the addition of calcium, strontium, and other trace elements to the water.

Unlike many other SPS corals, Hydnophora sp. corals can consume relatively large meaty items by consuming it outside of the skeleton. Offer zooplankton, brine or mysis shrimp, or other chopped meaty items that are marine in origin to supplement its diet.