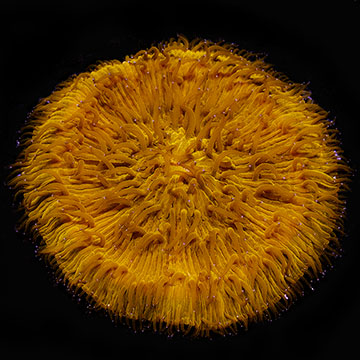 The Orange Short Tentacle Plate Coral is a relatively hard to find coral that originates from the Indo Pacific. These corals are found free living within the rubble zones of the reef, and have the ability to inflate themselves to both maximize light exposure, and to keep from being covered in sand.

It is a solitary, semi-aggressive coral with shorter tentacles than its cousin the Long Tentacle Plate Coral (Fungia sp.). Even with short tentacles, it can still damage other corals that it comes in contact with. With placement in the aquarium, keep in mind that it will often inflate itself with water and expand to twice its size. It will do best on the bottom of a reef aquarium, preferably lying on a fine sandy substrate. The Orange Short Tentacle Plate Coral is easy to maintain in the reef aquarium and makes an excellent candidate for the beginner reef aquarist. Care should be taken in handling it however, to prevent damage. It requires moderate lighting combined with moderate water movement within the aquarium. For continued good health, it will also require the addition of calcium, strontium, and other trace elements to the water.

It obtains most of its nutrition from photosynthesis, but benefits from the regular feedings of zooplankton and brine or mysis shrimp.

Write a Testimonial | Ask Customer Service
Eric W Concord , NC
This is a great addition to your tank. It's best placed on the substrate in the front of the tank where you can keep an eye on him as he does need spacing. His tentacles stretch out pretty far even though they are called short. Proper lighting and water flow is important for him. Use quality medium to high lighting. He accents the tank for a 2 inch coral and yellow is hard to find to balance out the common green corals.
1-1 of 1 testimonials