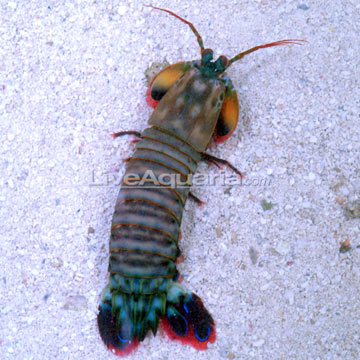 The Clown Mantis Shrimp, also referred to as the Peacock Mantis Shrimp, is included in the Smashing Mantis Shrimp group. They are very interesting shrimp that resemble the praying mantis insect. They have large colorful eyes that are either blue or green rimmed and their bodies exhibit many bright colors. The main part of the body is green with red outlines on the shell. These are extremely aggressive shrimp that should be housed alone in a species aquarium.

The Clown Mantis Shrimp should be housed in an aquarium that is devoted to this species. Only one shrimp should be kept in the aquarium. They have very quick claws that they use to break the shell of crustaceans and crabs. They should not be housed with fish or other invertebrates, unless they are very large, and caution should still be exercised. A sandy bottom with plenty of rubble and at least one piece of live rock should be provided for these shrimp to create a cave.

The diet of a Clown Mantis Shrimp should include live feeder fish, crabs and frozen meaty foods such as fish, scallop and shrimp.

Write a Testimonial | Ask Customer Service
Mason H Chappaqua , NY
This was my first time ordering a Mantis Shrimp from LiveAquaria.com, and I got pretty much what I would expect from Drs. Foster and Smith. He arrived alive and healthy, as well as vibrantly colored and acclimated quickly to my tank. He lost one of his raptorial appendages during shipping, but other than that, he was perfectly healthy, curious, and lively. I am very pleased with him.
Ray S Newport , NC
First purchase from Live Aquaria, arrived on time, in good health, and to my surprise rather small. Very pleased with customer service and care. I have had my little smasher "Chronos" for about 3 months now he's molted twice and has taken to whacking around the locally collected and quarantined crabs I feed him. Could not be more pleased.
Max H Fordland , MO
The price is high but in my opinion, it's totally reasonable. As far as shipping goes, it was done as good as possible. I was pleased that they took the time to add extra bags to prevent popping and that they used such a large bag. It arrived in great condition and appears totally healthy. The ONLY negative thing I can think of is that it is rather dully colored. It could be due to the young age though but overall, total quality product and this is the best and in my opinion only place to buy a peacock mantis shrimp.
1-3 of 3 testimonials