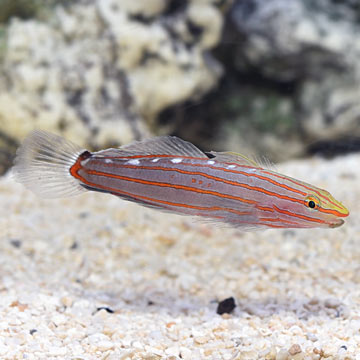 The Court Jester Goby, also referred to as the Rainford's Goby, or Old Glory, was first discovered in the Western Pacific in 1940 by Whitely and gets its name from its brightly colored body. The body is green and blue with horizontal orange stripes running the entire length of the body. The Court Jester Goby is very timid and peaceful and is a great addition to the reef or fish only aquarium.

It should be kept in a 10 gallon or larger aquarium that is well-established and has live rock and sand on which the fish can graze. It is best to keep only one of this species in an aquarium, unless the tank is large with an abundance of hiding places. It is rarely aggressive towards other species.

It is possible for the Court Jester Goby to spawn successfully in an aquarium.

The diet should consist of filamentous algae, small crustaceans, such as live and frozen brine shrimp, mysis shrimp.

Write a Testimonial | Ask Customer Service
Robert M Roseland , NJ
Mine made himself a nice little "cave" under some rocks. You can see him when he sticks his head out to feed. A very shy and timid fish. Provide plenty of hiding places among rocks for this little guy.
Steven N Barrington , IL
This does exceptionally well in my reef tanks. It eats algae, mysis, and pellets. Highly recommended for a peaceful reef tank.
Jack H Paso , TX
Very nice fish! Great in my 20 long and great algae grazer! I highly recommend this fish.
S. Finnell Canute , OK
I love, love, love this fish! He immediately went to work picking around on my rocks. He comes to the front of my tank and checks me out also. He stays in the lower levels of my tank, but is very active! Hope he lives a long time.
1-4 of 4 testimonials