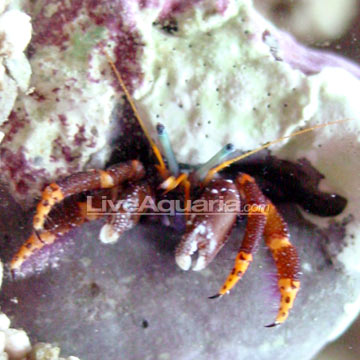 The Electric Orange Hermit Crab is a colorful cleaner for the marine aquarium. It has bright orange legs with brown banding. Unlike many members of the Diogenidae family, however, the Electric Orange Hermit Crab has unusually blue eyes. Like its Electric Blue cousin, this hermit crab grows to a considerable 2" size and consumes large amounts of algae, uneaten fish food, and detritus in your aquarium.