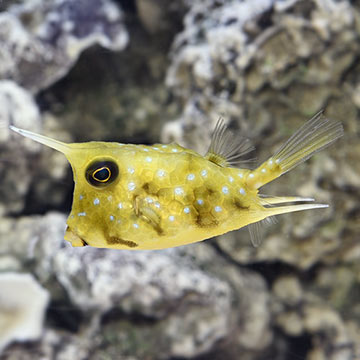 The Longhorn Cowfish inhabit the reefs of the Indo-Pacific, usually in the less turbid waters. The body is tan to yellow and covered with white and blue dots, and is occasionally referred to as the Yellow Boxfish; however, the Longhorn is not to be confused with Ostracion cubicus, commonly called the Yellow or Polka Dot Boxfish. In the wild, it is not uncommon to see a 20" specimen, while in the aquarium the Longhorn Cowfish tends to be dramatically smaller - 16" or less.

When possible, the Longhorn Cowfish should be the first fish introduced in the tank. It is intolerant of other Longhorns, so keep it in a large tank, with some live rock for algae scraping. Use caution if placing the Cowfish Longhorn in a reef tank as it may nibble on tubeworms. When housed correctly, the Cowfish Longhorn is long-lived.

Similar to other boxfish, the Cowfish Longhorn's skin is poisonous and, when threatened, it will release a toxin lethal to other tank members, including other Longhorns.

Since they are omnivores, the Longhorn Cowfish should be offered a variety of meaty and vegetable foods. They are slow eaters, and should not be housed with aggressive eaters.

Write a Testimonial | Ask Customer Service
Theresa U Elgin , IL
The Cowfish Longhorn is extremely friendly and will eat out of its owner's hand. It requires pristine water conditions, or it may succumb to disease. Ultra-Violet Sterilizers are recommended with Cowfish. Also keep carbon in the tank or filter at all times to prevent die offs due to ostracitoxin release.
James M Lebec , CA
This isn't a beginer's fish, but it does seem easier to keep than some people make it out to be,(or maybe I'm just used to keeping difficult fish by now). One thing that seems to help entice this fish to eat is feeding it pinches of mysis shrimp by hand along with sheets of nori. Also, do make sure never to expose this fish to air,(bag it under water, feed it below the surface), any trapped air inside this fish will kill it. This fish has wonderful personality, is increadibly smart, and seems to learn to recognise its owner.
Mark K Boston , NY
Gotta say recieved this fish and it was extremely healthy! As far as care for this fish it appears to very easy. This fish is a pig when it comes to food, and started eating flake, pellet, nori sheets, mysis, scallops, frozen dinner shrimp just about everything! Very personable fish which will follow you around the tank, like a puppy highly recommended!!
Nathan Schrand Cincinnati , OH
Hogwash! My cowfish eats from surface twice a day. He lives in a 37 gallon tank. I've had him for over 2 years. I never test the water for ammonia, nitrite or nitrate!!! I used to and I not only drove myself nuts, I killed quite a few fish trying to get every reading just right. I would suggest a bigger tank, no doubt, but be reasonable. I've been doing this for close to 20 years now. I change the filters every other month. He is spoiled eating expensive Hikari frozen food. Just be careful and watch for Ick. Do not over-medicate!!! Chill and enjoy if you can afford it. A fish with personality.
1-4 of 4 testimonials