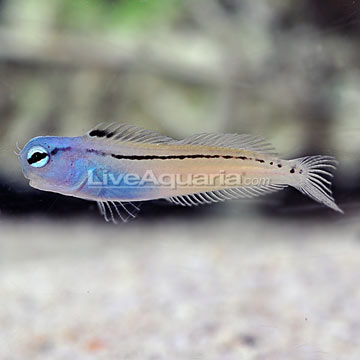 The Red Sea Mimic Blenny is an interesting blenny that has adapted its form and coloration to mimic the Meiacanthus nigrolineatus. All Meicanthus blennies have a venomous bite that they use as defense in case they are swallowed by a larger fish. By biting the inside of the mouth of the larger fish, they are then spit back out and spared their life. By mimicking these venomous fish, the Red Sea Mimic Blenny is then passed by possible predators. These fish are yellow and green in coloration with a series of black markings that follow the lateral line of the fish. They are herbivores, and are a beautiful addition to any community aquarium.

Generally found amid crevices and rocks on the bottom of its environment, the Red Sea Mimic Blenny needs an aquarium of at least 10 gallons with scattered rocks for perching and hiding. They are generally peaceful in nature, feed upon algae in the aquarium, and are reef safe.

The diet of the Red Sea Mimic Blenny should include dried seaweed, frozen preparation rich in vegetable matter and a quality flake or pellet food. It will also feed on (and help control) algae growing in the aquarium.

Write a Testimonial | Ask Customer Service
Fran Morelock Monroe , NC
I purchased this fish from you several weeks ago. She acclimated very well and was eating right away. She is growing and very fiesty. When I sit in front of the tank,she now comes out of the live rock to be fed. She will also go to the rock and rip off pieces of the macroalgae and look at me as if to say, "so there!" She was placed in a 30 gallon tank with 30+ pounds of live rock and a Mandarin Dragonet, and I have since added a pink clown fish. All are eating, growing, and I have a peaceful tank.
1-1 of 1 testimonials