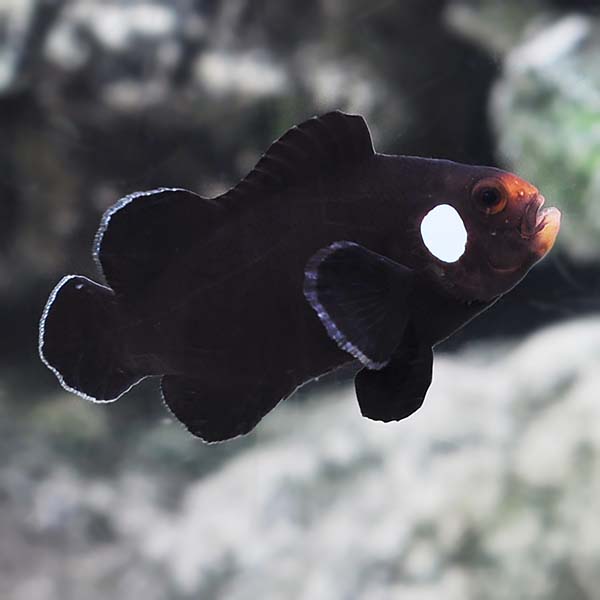 The ORA® Captive-Bred Double Dot Domino Clownfish is a very precious and unique variant of the Ocellaris Clownfish originating from the Midnight Clownfish (a nearly black natural mutation discovered in ORA’s grow out systems). The offspring of Midnight Clownfish typically range from completely stripeless to uniquely patterned Extreme Misbars. Occasionally ORA would find Midnight Clownfish offspring with white dots and with the help of Julian Sprung, these fish were named Dominos. The white dot can be on the cheek or on any other area of the body. The ORA Double Dot Domino Clownfish, as its name implies, features two dots.

The ORA® Captive-Bred Double Dot Domino Clownfish is also easy to breed in the home aquarium. The females will be the largest of the pair and the two fish will usually stay close to each other in the aquarium. Clownfish are egg layers and will deposit the eggs on a flat surface and defend the eggs from other tankmates. The eggs will normally hatch in 8-11 days depending on the water temperature. The fry must be reared in a separate aquarium on a diet of rotifers followed by baby brine shrimp.

The diet of the ORA Double Dot Domino Clownfish consists of almost any meaty food items and herbivore preparations.