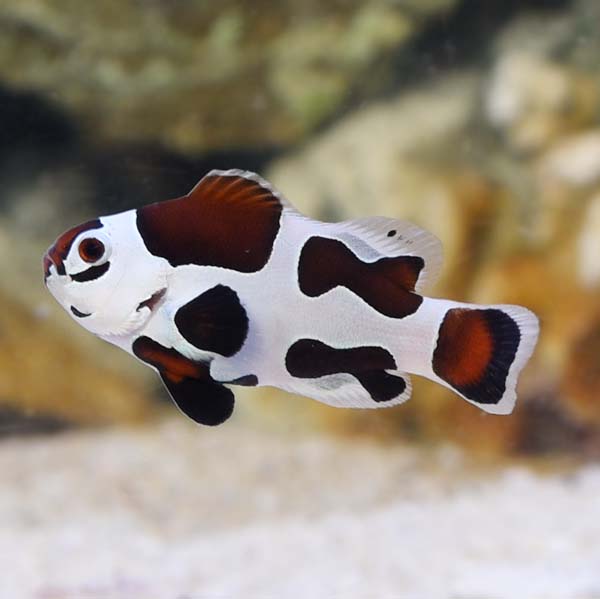 The Mocha Storm Ocellaris Clownfish does best, housed in an aquarium of at least 20 gallons or larger with plenty of live rock. It may form a symbiotic relationship with the following species of anemones; Carpet (Stichodactyla sp.), Sebae (Heteractis crispa), Bulb (Entacmaea quadricolor), or Ritteri (Heteractis magnifica) Anemones. Though the Mocha Storm Ocellaris Clownfish does not require an anemone to thrive, if you choose to house an anemone, always be sure that your aquarium and lighting system will support the needs of the host anemone before incorporating one into the aquarium.

The Mocha Storm Ocellaris Clownfish, like several other captive-bred clownfish, can be bred in the home aquarium with relative ease and is one of the most common "starter" fish for saltwater breeders. The female will be the larger of the pair, and the two fish will usually stay close to each other in the aquarium.

The Mocha Storm Ocellaris Clownfish is an egg layer and will typically deposit the eggs on a flat surface or within the proximity of the base of the host anemone and defend the eggs from other tank mates. The eggs will normally hatch in 6-11 days depending on the temperature. The fry must be reared in a separate aquarium on a diet of rotifers and eventually baby brine shrimp.

The Mocha Storm Ocellaris Clownfish is an omnivore, requiring both meaty foods as well as some greens in their diet. A high-quality marine flake food, rich in spirulina algae, as well as freeze-dried and frozen foods are readily accepted.

Write a Testimonial | Ask Customer Service
Andrew Scott Madisonville , KY
This order was to my satisfaction. The fish was able to jump into the tank and looked so happy to be there. I look forward to order more fish from liveaquaria.com. Their guarantees on all fish and customer service make it a great way to find a new pet. I was also able to contact the number given and get a hold of a representative within a couple of minutes.
1-1 of 1 testimonials