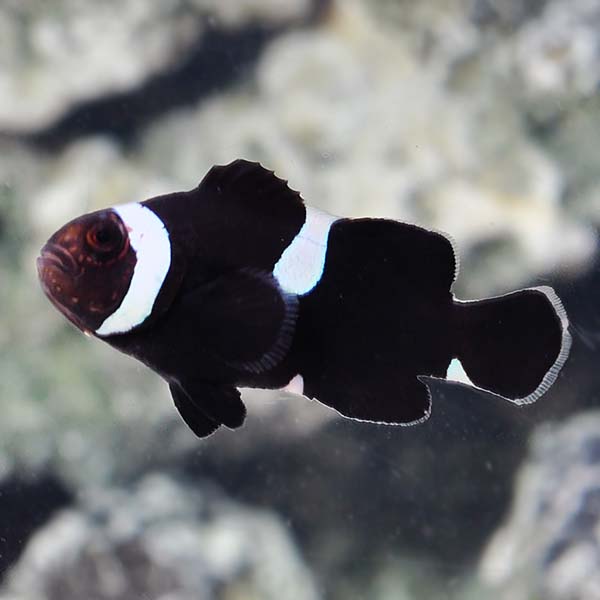 The Captive-Bred Misbar Black & White Ocellaris Clownfish is normally found in association with anemones on the reefs of the Coral Sea. It can be found individually, or more commonly, in pairs or small groups within the same anemone such as Heteractis magnifica or Stichodactyla mertensii. These beautiful Black Ocellaris typically have an incomplete center or tail stripe, and occasionally they may have an incomplete head bar. These captive-bred clownfish grow to a maximum size of 3 inches in the aquarium and may be kept singly or in groups.

Their unique patterns make them highly identifiable and desirable. Misbars are not the result of selective breeding, they derive from developmental glitches in stripe patterns in the larval stage. Almost every spawn of A. ocellaris will result in some misbarred juveniles, but they are unpredictable, and each one contains a distinct pattern that produces a unique individual specimen.

The Captive-Bred Misbar Black & White Ocellaris Clownfish is very distinctive with its jet-black body and combination of partial and full white stripe(s) on each side. As Juveniles these clownfish begin life donning an orange or umber coloration, as they mature they will begin to darken to their adult coloration. They are very hardy and are perfect for the novice or seasoned aquarist.

The Misbar Black and White Ocellaris Clownfish is a good candidate for a reef aquarium. If introduced to the aquarium at the same time, many varieties of tank raised clowns can be maintained together in the aquarium.

Captive-Bred clownfish are omnivores, requiring both meaty foods as well as some greens in their diet. A high quality marine flake food, rich in spirulina algae, as well as freeze dried and frozen foods are readily accepted.