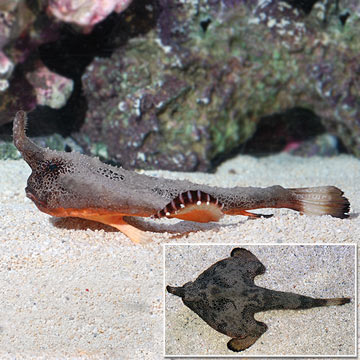 The Longnose Batfish, also called the Walking Batfish, has a horizontally flattened body, mottled reddish-brown to a dark tan; it may have dark spots along the sides and fins. In behavior, it is closely related to frogfish.

The Longnose Batfish has a moveable antennae-like structure on its nose. When hungry, the Longnose nearly freezes on the sea floor, moving this antennae back and forth. When a small fish gets curious and moves in for inspection, the Longnose opens its mouth and sucks in the unsuspecting victim.

The Longnose is a very poor swimmer, but has developed very strong pectoral and pelvic fins that it uses as hands and feet to creep along the sea floor. The Longnose Batfish has been seen jumping, crawling and even walking on "all fours". When threatened, the Longnose Batfish immediately buries itself in the sandy bottom.

Because of its slow locomotion, it cannot even begin to compete with fast-moving fish, so tankmates must be chosen with this in mind. The Longnose Batfish needs an aquarium of at least 70 gallons with a sand/gravel/loose mud substrate. This and dim lighting will provide the best environment for this fish.

The Longnose Batfish requires a diet of crustaceans and polychaete worms along with small feeder fish. It may, however, refuse to eat in an aquarium. When first introduced into the aquarium, live saltwater feeder shrimp should be used to entice this fish to eat.