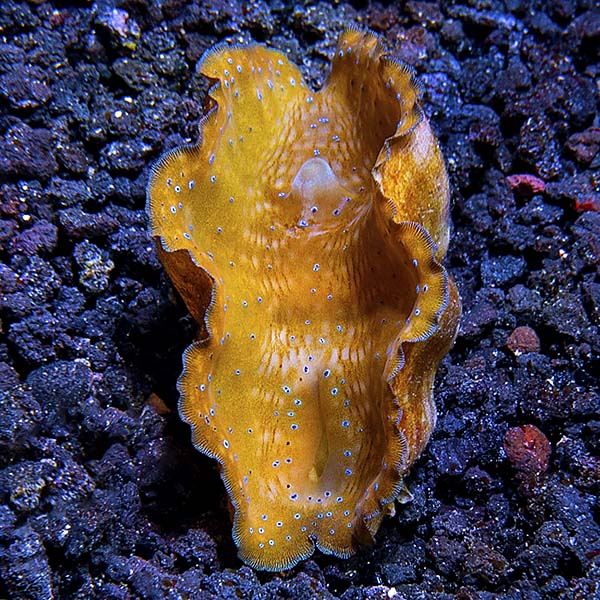 The ORA® Aquacultured Gigas Clam is also known as the Giant Clam. In fact, its species name gigas is the Latin word for giant. This is the largest clam in the Tridacna genus with specimens growing well over 3 feet in length in the wild and weighing hundreds of pounds! The shell of an adult Gigas Clam is not as symmetrical as its cousins (T. maxima, T. squamosa and T. derasa) making it the only Tridacnid unable to completely close its shell when mature. In the wild, Gigas Clams are often found living on reef flats and shallow lagoons typically on sand or coral rubble.

The ideal conditions for the aquacultured ORA® Gigas Clam is a large established reef aquarium with bright lighting achieved with T-5s, powerful LEDs or the more intense metal halides. To maximize the growth rate of your aquacultured ORA® Gigas Clam, it is imperative to maintain a high pH, alkalinity, and calcium levels and to keep phosphate and nitrate levels as close to zero as possible.

In addition to high lighting conditions and near pristine water quality, the aquacultured ORA® Gigas Clam benefits from strong, intermittent water flow within the aquarium. This is best accomplished with a wavemaker and multiple powerheads. For continued good health, the aquacultured ORA® Gigas Clam requires the addition of calcium, strontium, iodine, magnesium supplements, as well as trace elements.

The photosynthetic symbiotic zooxanthellae algae hosted within aquacultured ORA® Gigas Clam satisfies the majority of its nutritional requirements. However, the aquacultured ORA® Gigas Clam will benefit from supplemental feedings, especially when small, in the form of micro foods designed for filter feeders. Offer phytoplankton and other micro-foods.