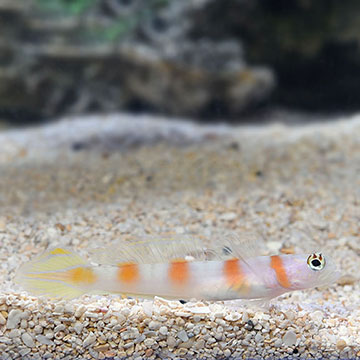 As a species of shrimpgoby that forms a symbiotic relationship with alpheid shrimp, the Flagtail Shrimp Goby develops a unique bond and cohabitates with the burrowing crustacean providing a watchful eye while the shrimp digs a burrow for them to share.

As such, the ideal setup for the Flagtail Shrimp Goby is an established 30 gallon or larger aquarium with plenty of live rock and a layer of fine to moderately sized sand substrate to sift through. A low aquarium with more horizontal surface area for living space is preferable over a taller one. In addition, a tight-fitting canopy is necessary to prevent the Flagtail Shrimp Goby from jumping out of the aquarium. It will rarely become aggressive towards other fish, but is territorial and will fight with its own kind unless they are a mated pair.

The Flagtail Shrimp Goby adapts well to reef aquariums but pose a potential threat to small, delicate ornamental shrimp. Its diet should consist of a variety of fresh or frozen mysis shrimp, vitamin-enriched brine shrimp, and finely chopped table shrimp. It should be fed at least twice per day.