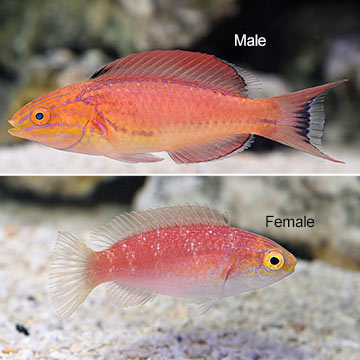 The Johnson’s Fairy Wrasse, Cirrhilabrus johnsoni, is a gorgeous wrasse that was until recently a challenge for aquarists to obtain due to its scarce appearance in the aquarium industry. Though populous in its native habitat, the Johnson’s Fairy Wrasse is only found and known to exist in the Marshall Islands at the Kwajalein Atoll. Fortunately for aquarists, this species of Cirrhilabrus wrasse has become more available and remains highly sought after as one of the smaller members of its genus, maturing to an adult length of about 3”.

Cirrhilabrus johnsoni is a reef dweller found at moderate depths from 60 to 90 feet. This striking wrasse can be found swimming among sparse rubble patches with mixed algae such as Halimeda, soft corals and rocky structures possessing coralline algae. As such, the ideal setup for the Johnson’s Fairy Wrasse is an established marine aquarium of at least 50 gallons aquascaped with a generous amount of live rock and plenty of open spaces to swim. Johnson’s Fairy Wrasse is considered reef safe and should be housed in aquariums with other peaceful tankmates. A covered aquarium is a must since all wrasses are known to be jumpers.