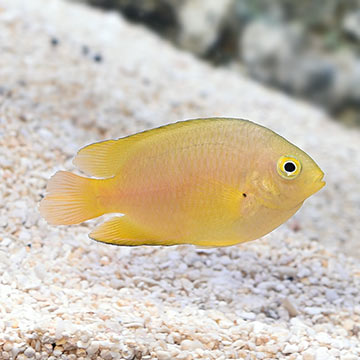 The ORA® Captive-Bred Lemon Damselfish is also known as the Golden Damselfish, Molucca Damsel, Molucca Demoiselle. This bright yellow Damselfish may display blue lines across its head and fins. As the fish matures the bright yellow coloration begins to diminish slightly and becomes less shy within the aquarium.

The ORA® Captive-Bred Lemon Damselfish has a unique advantage over wild-harvested species. Captive-Bred Damselfish are very hardy and more accustomed to conditions found in home aquariums. Therefore, it makes a great choice for novices and seasoned aquarists alike.

This member of the Pomacentridae family prefers multiple hiding places and peaceful tankmates. Though most Damselfish will ignore other fish, invertebrates, or corals, some may be territorial towards its own kind or similar-sized fish. The Lemon Damsel is best kept in small groups of odd numbered fish in suitably sized systems.

The Lemon Damsel requires a 30-gallon or larger aquarium with numerous hiding places.

The diet should consist of a variety of meaty items, herbivore preparations and flaked foods.

Write a Testimonial | Ask Customer Service
C Wilaon Atlanta , GA
I ordered two of these and am very pleased. YRMV but my two fish are way more yellow than the LA photograph. They are almost as yellow as a yellow tang. Fish acclimated well to an established tank. I highly recommend!
1-1 of 1 testimonials