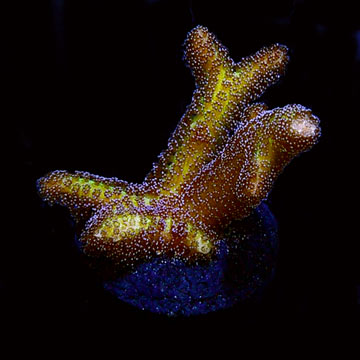 The ORA® Aquacultured Bird of Paradise coral is the most attractive strain of Seriatopora ORA® cultures. This eye-catching coral boasts an electric green base with metallic purple polyps. At times these beautiful polyps are so extended we are only able to see a hint of the green base. Just by slightly increasing the flow, these polyps can retract just enough to allow the green base to stand out while still maintaining a healthy specimen. This is a relatively fast growing species, and because of its delicate branches, care should be taken in the placement of the coral in order to protect it from damage.

The ORA® Aquacultured Bird of Paradise Birdsnest coral is attached to a plastic plug and can be easily placed in holes or between the rockwork of the reef aquarium.