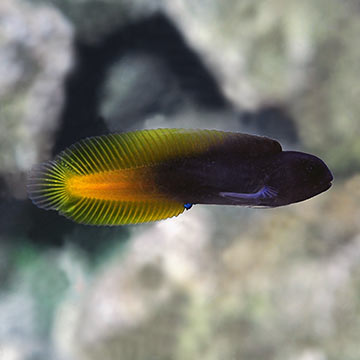 The Yellowtail Black Blenny, also known as the Flametail Blenny, is striking in appearance with its bold blocks of black and yellow coloration. At first glance, this handsome blenny can be easily misidentified as the popular and similarly colored Bicolor Blenny (Ecsenius bicolor). Upon closer inspection, the observant hobbyist will notice evident differences in appearance and behavior.

The Yellowtail Black Blenny requires a 30-gallon or larger aquarium with ample rockwork to thrive. It will occupy most of its time amid crevices and rocks on the bottom of its environment, occasionally darting onto higher rockwork for perching and foraging. The Yellowtail Black exhibits great personality and is normally peaceful towards other tank members, but have been known to pick at other blennies, smaller gobies, dartfish and other similar shaped fish.

The Yellowtail Black Blenny should be fed a well balance diet of carnivorous foods along with a selection of foods designed for herbivores.