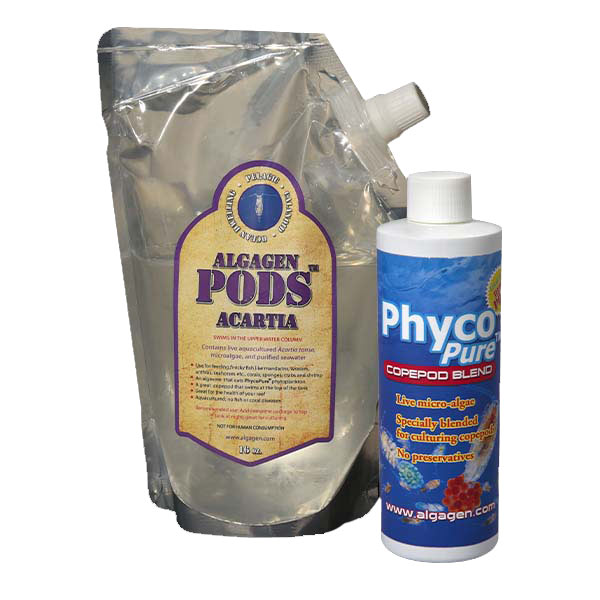 Cultivate live copepods with greater convenience and savings. AlgaGen Copepod Grow Kit makes it easier than ever for hobbyists to cultivate live copepod populations for supplementing the diet of corals and other marine reef aquarium filter feeders. AlgaGen Copepod Grow Kit includes one 8 oz bottle of PhycoPure™ Copepod Blend and one 8 oz bottle of ReefPods™ Acartia at one terrific package price.

Copepods are a major component of marine zooplankton, and play a significant role in the oceanic food chain. Establishing active zooplankton populations in the home reef aquarium is the final key to ultimate aquarium success, and now it's easier than ever. Use AlgaGen ReefPods™ Acartia to establish your copepod population. Feed and maintain them using AlgaGen PhycoPure™ Copepod Blend live microalgae (phytoplankton).

AlgaGen PhycoPure™ Copepod Blend contains T- Isochrysus galbana, and Chaetoceros gracilis to sustain copepod populations. For best results, add 1 cap full per 10 gallons directly to the reef tank or refugium. If culturing copepods in a separate jar or tank, feed 2-6 tsp (10-30ml) per gallon per day. Copepods will consume these microalgae quickly and will turn the water clear. Over- or underfeeding can affect the growth of the copepods so strive to maintain a very light tint to the water by feeding smaller doses more often. Keep refrigerated.

AlgaGen Copepod Grow Kit is guaranteed to arrive alive but is exempt from our extended guarantee after their arrival.