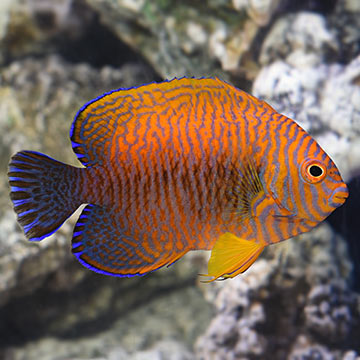 The Potter's Angelfish requires at least a 70 gallon, well-established tank with multiple hiding places and live rock for grazing on microalgae. It may attack soft corals and other sessile invertebrates in the reef aquarium.

It is hermaphroditic, difficult to breed, and there are no distinguishing characteristics to help differentiate males from females.

The Potter's Angelfish should be offered a variety of foods including Spirulina, marine algae, high-quality angelfish preparations, mysis or frozen shrimp, and other meaty items.

Write a Testimonial | Ask Customer Service
Anthony B Colchester , CT
Brightly colored addition to any aquarium. Males seem to have more "blue" in them. Mine adjusted very well to an established aquarium with a lot of live rock. Now it is eating seaweed selects. This took a couple of weeks though.
Larry H Amarillo , TX
I love my Potter's Angel from Divers Den. Absolutely beautiful and easily the most personable fish in my tank. I have a mixed reef tank with zoas, LPS & SPS - he never bothers anything. Gets along great with his tank mates, 2 ocelaris clowns, royal gramma, orange spotted goby, bicolor blenny and melanarus wrasse. Highly recommend this fish and highly recommend getting one from Divers Den.
1-2 of 2 testimonials