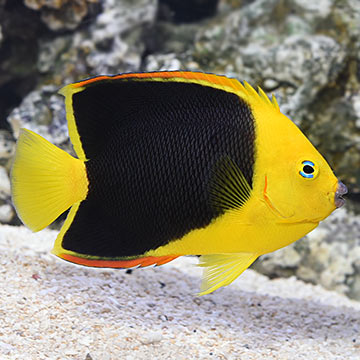 The Rock Beauty Angelfish has a body that is predominately black especially on the back half, as an adult. The head and front half portion of the body, and the caudal fin are a bright yellow. The eyes have striking sapphire-blue accents. Similar in appearance, the juvenile initially has a predominately yellow body with a large caudal black spot that just seems to enlarge, overwhelming the yellow coloration with the exception of head, body area just behind the head, and the caudal fin.

The Rock Beauty Angelfish is difficult to sustain in a home aquarium because of its dietary requirement of sponges. The diet in the aquarium should include vegetable matter such as marine algae and Spirulina, finely chopped meaty items, and high-quality angelfish preparations containing sponges.


I have been able to maintain this hardy, beautiful fish with little difficulty. It readily accepts flake food and brine shrimp. This is a very hardy fish and it is very beautiful.

Mark Gonsalves East Providence , RI
I have had my Rock Beauty for about five months. He now accepts brine shrimp and flakes with no problem. I have found him to be a very easy fish to maintain.
1-2 of 2 testimonials