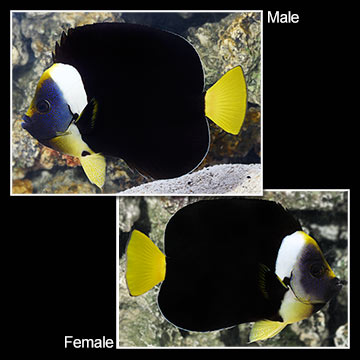 The False Personifer Angelfish, also known as the Bluemask Angelfish, has an unusual, almost blistered appearance to its body which is generally black. The face is blue-green and the males have a speckled yellow face. A swatch of yellow covers the forehead and the caudal fin is also yellow and split with a blue-green band. This is one of the few species of angelfish where the males differ morphologically from the females. In this case, the males have a slightly longer body than females.

A 180 gallon or larger tank with large quantities of live rock should be provided. Not a good reef dweller, the Personifer Angelfish is prone to nip at stony and soft corals (sessile invertebrates) and clam mantles.

The diet should consist of Spirulina, marine algae, high-quality angelfish preparations, mysis or frozen shrimp, and other meaty items.

Write a Testimonial | Ask Customer Service
Raymond L Setauket , NY
I received my fish about a month ago and it is doing very well. Eats all types of food including pellets. He ate about an hour in the tank. He came very healthy and is a very rare and beautiful fish. He gets along with all my other angels, tangs etc. This web site is truely remarkable and am extremely happy with all the fish I have purchased .
1-1 of 1 testimonials