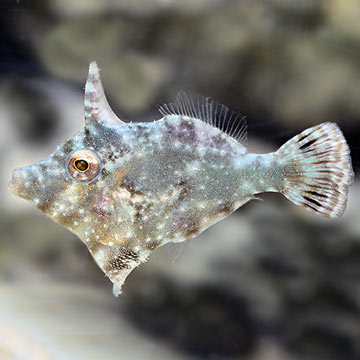 The ORA® Captive-Bred Aiptasia Eating Filefish is also known as the Bristletail Filefish, Matted Leatherjacket, Tomentosus Filefish, or Matted Filefish. In the wild the Aiptasia Eating Filefish prefers the shallows of seagrass areas. Adding additional camouflage to its already unique color pattern of mottled green, brown, and tan which can change depending on its surroundings and mood.

These shy fish are rarely aggressive towards other fish except those of its own genus. It is best suited for aquariums 30 gallons or larger that does not contain small invertebrates.

These fish have been known to spawn in captivity, and males are normally larger than the females. These fish are easily sexed with males having fine bristle-like hairs on each side of their body down the caudal peduncle or base of the tail.

Write a Testimonial | Ask Customer Service
Nate F Atlanta , GA
I don't have any Aiptasia but I got one of these fish. Surprisingly, it became a favorite. I named it "Mr. Ed" because of its horse face. I have some coral around it and it is hooked on shrimp pellets. It will consistently come out when I am near if it is hungry.
Dustin H Baltimore , MD
So I was literally at my wits end with the aptasia in my tank, was real close to shutting it down. Had tried other options from lasers to kalkwasser to rid them and it was just to many. I bought one of these and within two weeks every single one was gone! I couldn't believe it. Now I just toss in a rock from my sump to give him a treat every once in a while. Oh it eats pellet food no problem so you dont have to worry about when the aptasia are gone. Mixed reef 110 gl.
1-2 of 2 testimonials