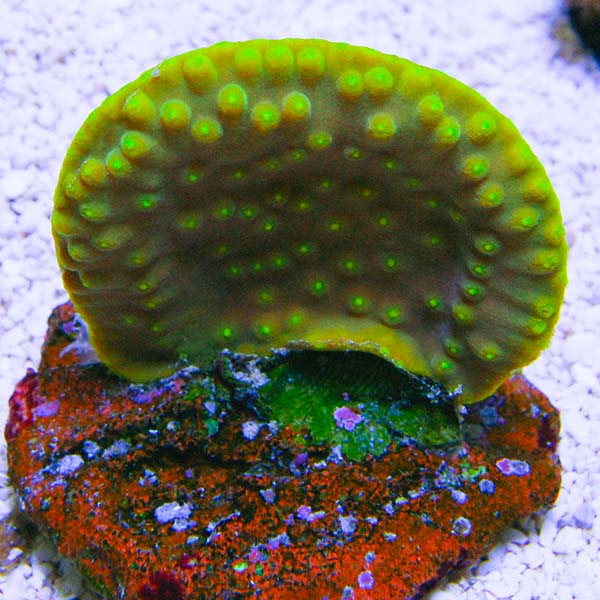 The aquacultured Scroll Coral from ORA® will add beauty and color to your reef aquarium. Yellow Polyp Turbinaria has very small polyps compared to other Large Polyp Stony corals (LPS). Other Turbinaria species may be referred to as Pagoda, Turban, Cup, Vase, Bowl, or Scroll Corals.

The genus name, Turbinaria, is derived from the Greek word turbinatus (cone-shaped) because it usually grows in a conical or cup shape while living on the reef. It may also be found in the form of cups, ruffled ridges, plates, vases, or scrolls. It may grow horizontally or vertical. A number of species may extend their polyps during the day or night while in an aquarium.

Turbinaria sp. varies in the amount of care they require. Those that are highly convoluted or thin plates, like this one, require more water flow, but aquacultured pieces like this are relatively hardy and require moderate care level. It is a peaceful reef inhabitant and does not bother other corals that are placed in close proximity to it. However, it should still be provided with ample space away from other corals because it does grow quickly. It will require a medium light level combined with a medium water movement within the aquarium. For its continued good health, it will also require the addition of calcium, strontium, and other trace elements to the water.

The ORA Aquacultured Scroll coral is attached to a plastic plug and can be easily placed in holes or between the rockwork of the reef aquarium.