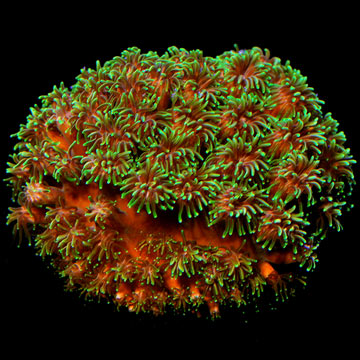 The Aquacultured ORA® Galaxea Coral from ORA is a large polyp stony (LPS) coral and often referred to as the Tooth, Star, Crystal, Starburst, Brittle, or Galaxy Coral. Its genus name, Galaxea, is derived from the Greek word galaxaios (milky), describing the polyp's milky-white tips. While bright green is the most common, some species can be found in a variety of colors.

It is an aggressive coral in the reef aquarium, and therefore, needs adequate space between itself and other corals. Its polyps can extend up to several inches at night and will sting and cause damage to other species of corals that it can reach. For continued good health, it will also require the addition of calcium, strontium, and other trace elements to the water.

They will thrive in a variety of lighting conditions, ranging from power compacts, T-5s, powerful LEDs and up to the more intense metal halides. The ORA aquacultured corals satisfy the majority of their nutritional requirements by means of photosynthetic, symbiotic zooxanthellae algae hosted within its body but will benefit from the addition of foods designed for corals and invertebrates.

The ORA® Aquacultured Metallic Green Galaxea Coral is attached to a aragonite plug and can be easily placed in holes or between the rockwork of the reef aquarium.