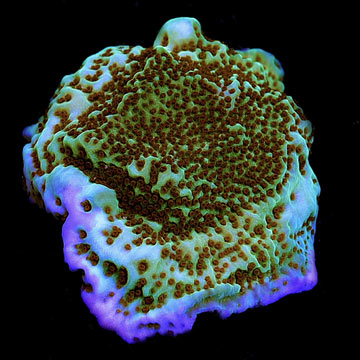 The aquacultured ORA® Mind Trick Montipora is considered one of the most spectacular Montipora varieties in the hobby. Its sea green body color is accentuated by an intense violet growth edge and hot red polyps. The Mind Trick Monti grows in an encrusting form until it reaches the edge of the rock, where it will begin to plate out horizontally. ORA has been growing this exceptional coral in their greenhouse since 2009 when they obtained a single fragment from a local hobbyist. This thick-bodied Montipora grows slower than your average thin plating Montipora but we still consider it to be a pretty fast grower.

Aquacultured Montipora is one of the easier to maintain SPS corals and grows rapidly in the established reef aquarium. It will require moderate lighting combined with a medium water movement within the aquarium. For continued good health, it will also require the addition of calcium, strontium, and other trace elements to the water.

They will thrive in a variety of lighting conditions, ranging from power compacts, T-5s, powerful LEDs and up to the more intense metal halides. The ORA aquacultured Corals satisfy the majority of their nutritional requirements by means of photosynthetic, symbiotic zooxanthellae algae hosted within its body. Alter their position in the aquarium depending on the lighting mentioned above.

It will also benefit from additional food fed weekly in the form of micro-plankton or foods designed for filter feeding invertebrates. The ORA Aquacultured Mind Trick Montipora coral is attached to an aragonite block and can be easily placed in holes or between the rockwork of the reef aquarium.