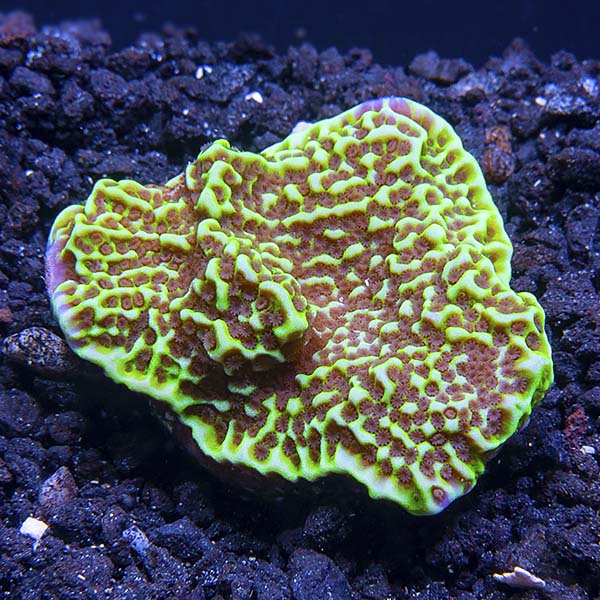 The aquacultured ORA® Confusa Montipora is a horizontal plating Montipora with very pronounced ridges covering its undulating surface. This coral displays a beautiful purple coloration with a bit of green highlights to brighten anyone's aquarium. However, under intense lighting and water flow the coral with have an overall green coloration which is interrupted between the ridges by small brown polyps while the plate edge and new growth are intense purple in color. Occasionally this coral grows thick, columnar upright branches, though ORA has yet to figure out what environment is most conducive to this growth form. This is a relatively slow growing coral that achieves best coloration under strong lighting conditions, though it is always best to gradually acclimate corals to a different lighting intensity.

Aquacultured Montipora is one of the easier to maintain SPS corals and grows rapidly in the established reef aquarium. It will require medium water movement within the aquarium and for continued good health, it will also require the addition of calcium, strontium, and other trace elements to the water.

They will thrive in a variety of lighting conditions, ranging from power compacts, T-5s, powerful LEDs and up to the more intense metal halides. The ORA aquacultured Corals satisfy the majority of their nutritional requirements by means of photosynthetic, symbiotic zooxanthellae algae hosted within its body.

It will also benefit from additional food fed weekly in the form of micro-plankton or foods designed for filter feeding invertebrates. The ORA Aquacultured Confusa Montipora Coral is attached to an aragonite plug and can be easily placed in holes or between the rockwork of the reef aquarium.