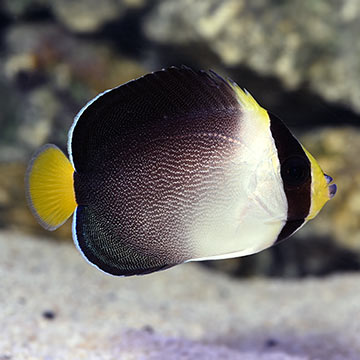 Due to the increased level of care required for this particular species it has been designated as "Difficult". Some acclimate well, while others may hide and not eat. Providing a quietly-located aquarium with non-aggressive tank mates and plenty of hiding places may help. A minimum of a 120 gallon tank or larger provided with live rock for grazing will also help provide an optimal environment. The Singapore Angelfish is prone to nip at stony and soft corals (sessile invertebrates) and clam mantles. It will also graze on microalgae, filamentous algae, and diatoms.

The Singapore Angelfish is hermaphroditic, difficult to breed, and does not have distinguishable variations in color between male and female.

The diet should consist of mysis or finely shaved frozen shrimp, and other meaty items.

Write a Testimonial | Ask Customer Service
Dave S Norwich , CT
My Singapore is a beautiful, hearty fish that gets along with all my fish. She will attempt to clean the other fish and they seem to enjoy it. I strongly recommend this fish to the novice aquarist.
Miles S Batesville , IN
After looking for months in the local fish stores I have around my area, I decided to purchase the Singapore Angelfish from LiveAquaria.com. The Angelfish came in a nice cooler and was alive. Very well bagged with triple bag protection! It's been a few days and my Angelfish is now swimming and eating with the rest of my fish. I have my Singapore Angel with Two Tangs, Coral Beauty, Blue Spotted Puffer, Lyretail Wrasse, Black Clownfish, and a Foxface. There was some aggression at first from his new tank mates, but that has died down. My Angelfish did not eat much for a few days, but it went after the frozen Mysis shrimp and Pellets. I used garlic as a way to entice him/her to eat. Took a few days, but now he/she is eating like a pig. My Singapore Angelfish makes a wonderful addition to the tank and I look forward watching him/her grow! Very beautiful and an affordable option to beautify your tank! Pros: Can get along with other Angels due to looking more like a butterfly fish. Colors are outstanding, and the spotted pattern is amazing. Very affordable. Cons: Hides at first!
Shane L Oakland , MD
The Singapore Angelfish I ordered acclimated well into my aquarium and immediately started playing with my Ocellaris Clownfish which I also purchased from Live Aquaria. The Singapore Angelfish was a beautiful and cheap way to enhance my aquarium with looks and personality.
Mark M Lincoln , NE
If you want to have some real laughs watching fish antics this is the fish - so much energy and swims entire tank ! Arrived in excellent condition and began picking on rock next day, however did not eat fish food for a week including nori. After a week though beagan eating frozen and dry food like a pig. So the real funny thing about this fish is it thinks it's a wrasse. I added a peaceful halichores wrasse (timor) at the same time and the angel follows it around like a mother hen. A few weeks later added another peaceful halichores (adorned) and the angel did the same thing to it - so now it is being mother to 2 wrasses ! It loves to follow them around and see what they are eating and try to touch them - the wrasses for the most part ignore the angels antics and just accept the fact that that's the way it's going to be - their adopted mother -ha ! This fish has more than doubled in size in about 2 months and is beautiful with all it's markings including nice blue outlines. This is definitely a top 10 fish !
1-4 of 4 testimonials