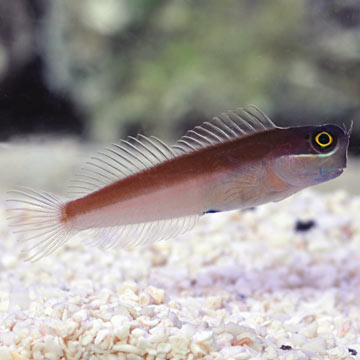 True to its namesake, the Yellow Eye Combtooth Blenny features a distinct yellow ring around its very large eyes and sports cryptic coloration to disrupt its form. The counter shading follows neatly along its lateral line where the dorsal half is a deeper sienna brown coloration while the ventral half is a much lighter flesh tone. Shades of blue including an electric blue band beneath its eyes create a mask-like effect to further help conceal it from would be predators.

The Yellow Eye Combtooth Blenny needs a tank of at least 10 gallons with plenty of scattered live rock for perching and hiding. The Yellow Eye Combtooth Blenny is generally peaceful, but may become territorial towards others within the same genus. Blennies normally make a good addition to reef aquariums, but use caution in smaller set ups, or with smaller fleshy corals, as some individuals have been known to pick at the mantles of clams, and at fleshy large polyp stony corals when underfed.

The diet of the Yellow Eye Combtooth Blenny should include vegetable matter, including frozen and dried foods containing marine and blue-green algae. It will also feed on (and help control) algae growing in the aquarium.