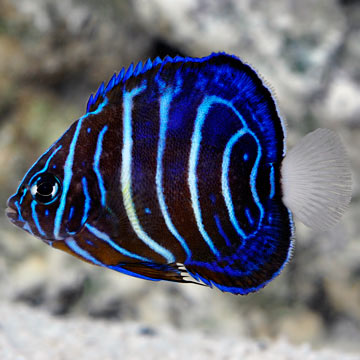 We are pleased to offer Juvenile Captive-Bred Annularis Angelfish spawned and reared in land based saltwater ponds in Bali Indonesia. A striking fish, the Annularis angelfish is also known as the Blue Ring or Blue King Angelfish. As a juvenile, the stripes run vertically, and are white to light blue developing into the brilliant sapphire stripping seen in adults. The mostly black body of the juvenile will also begin to soften into the brownish coloration sported by adults. As an adult, they have brilliant sapphire stripes running diagonally from their chest up to their soft posterior dorsal fin over a predominantly brown body and whitish-blue tail.

Although these fishes can reside in smaller sized aquariums initially, a minimum of a 220 gallon tank is necessary for a single Annularis adult as they grow quite large for an Angelfish. Provide plenty of hiding places such as caves and live rock for grazing. Like most other larger angelfish, they will nip at sessile invertebrates such as tube worms, feather dusters, clams, along with soft and stony corals.

All Angelfish are considered hermaphroditic, and visibly, it is not possible to differentiate males from females with the exception of their body shape when they are fully mature. Additionally, these fishes are semi-aggressive and they can become territorial once acclimated to the aquarium.

These Captive-Bred Annularis angelfish are reared and fed prepared foods, so their diet should consist primarily of marine pellets, marine flake foods, seaweed strips, and enriched meaty foods such as brine and mysis shrimp.