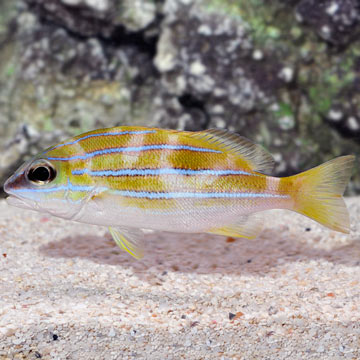 One of the most widespread of the snappers, the Bluestripe Snapper, also known as the Blue-Line Sea Perch, ranges from the Red Sea south to Madagascar and east to India, Asia, Indonesia, Australia and a number of Pacific Islands including Hawaii. Your specimen will be from Fiji, Indonesia, or Maldives, and make a hardy and rewarding edition to your FOWLR aquarium.

The Bluestripe Snapper's body is moderately deep in profile, with a distinctly steeply-sloped head. The back and sides of the fish are bright yellow, while the underside fades to white, presumably as camouflage to disappear against the bright ocean surface when viewed from below. Four bright-blue stripes run lengthwise across the side of the fish, with several faint greyish stripes on the lowermost part of sides.

Write a Testimonial | Ask Customer Service
James Raleigh , NC
Beautiful fish, great for a large fowlr tank. That being said, do not take for granted the fact that it is in fact a schooling fish. I made the mistake of getting a single specimen and after a month long QT and finally entering my display he went neurotic. Ate fine the first few days and then started trying to school with its reflection so bad that eventually it was ramming the sides of the tank to get to its reflection and this was only about a 3" specimen. My grouper wasn't exactly friend material I guess, took him to a local store to find a more appropriate home.
1-1 of 1 testimonials