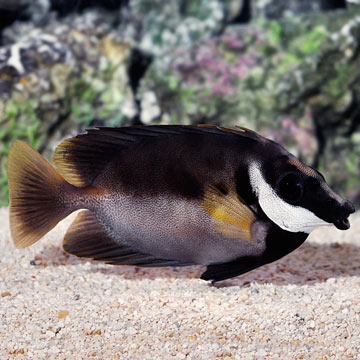 Available in the trade for the first time ever! You've read about this exciting new algae grazer from Tonga, heard rumors about, maybe even seen it come and go within hours on Diver's Den. . . now's your chance to be the first in your reef club to feature the Tongan Black Foxface in your showcase aquarium!

The Tongan Black Foxface may reside in a 125-gallon or larger aquarium. It is a very peaceful species except when housed with other rabbitfish. The Tongan Black Foxface may be housed with more aggressive fish. Its predators will tend to leave it alone because of its venomous dorsal spines. Rabbitfish are generally reef-safe if they are well fed. If not, it is possible for them to nip at and consume some species of LPS and soft corals.