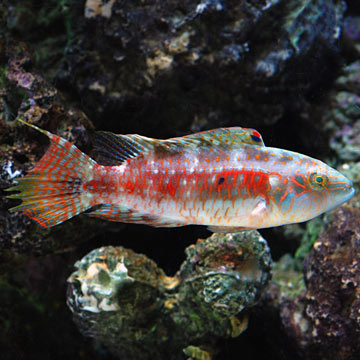 True to its namesake, the Two Spot Wrasse is beautifully adorned with striking facial markings punctuated by two, dark spots. Gorgeous tomato-red coloration crackles vibrantly across the face of the Two Spot Wrasse and continues all the way to the caudal fin to create an exotic network of color and pattern.

Typical of many wrasses the Two Spot Wrasse demonstrates sexual dimorphism. The male Two Spot Wrasse sports a rhomboid caudal fin, often with a single elongate filament that extends from the top. In contrast, the female Two Spot Wrasse has a round tail and no filament. This festive wrasse is sure to make a colorful addition to the fish-only marine or Fish-Only-With-Live Rock aquarium.

The Two Spot Wrasse inhabits the outer reef slopes and deep lagoons among rubble and algae. To best replicate this environment, the ideal setup for the Two Spot Wrasse will be a well-established saltwater aquarium of at least 75 gallons in size aquascaped with live rock. Incorporate a large area of open substrate as well as open spaces for swimming.