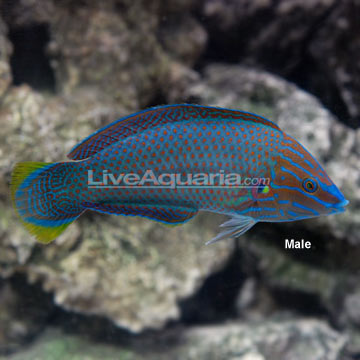 The simply-striking Grey Head Wrasse, or Threespot Wrasse has three white lines on either side of its head, three black spots along its back, and three false "eyes" running along its dorsal fin back to a fourth on the tail in Juveniles and Females. Adult male Grey Head Wrasse, sport vivid blue stripes through their face with orange/red spots along the length of their body.

A 70 gallon or larger aquarium with a tight-fitting lid, a 2-3 inch sandy bottom to hide under if frightened, and other peaceful wrasses, including its own species, is an acceptable environment.

It will eat fireworms and pyramidellid snails, protecting corals and clams which it will not bother. However, larger specimens may prey on smaller ornamental shrimp and crabs. In addition, it may eat feather dusters, wild shrimp, tubeworms, and flatworms. It may also eat parasites off of tank mates. Diet should include vitamin enriched frozen mysis shrimp, vitamin enriched frozen brine shrimp, and other meaty foods along with a high quality marine flake and marine pellet food.

Write a Testimonial | Ask Customer Service
Rich L MA
A super fish to add to your tank! I am partial to wrasses and specifically the Halichoeres species. This fish will not disappoint. It is not only a very colorful fish, but peaceful as well. It has struck up a partnership with a Rusty Angelfish I have and the two of them are constantly on the move hunting around the tank for food. It does like to have a lot of rock work to hide in if it is frightened. Be careful though, if not fed well, it will eat snails or anything else it deems edible.
Adam V Flint , MI
Gorgeous and large wrasse. Loves nori like all of my wrasses. Very curious,colorful and really cool shape. Highly recommend.
1-2 of 2 testimonials