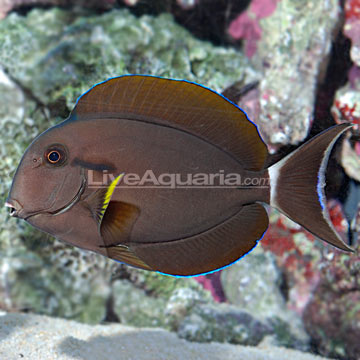 The Epaulette Surgeonfish, also known as the Eye-Stripe Surgeonfish or Epaniette Tang, is one of the more peaceful surgeonfish in the hobby, though its large size makes it a better fit for only appropriately-roomy showcase aquariums. It has a bluish-greyish body with black bands extending back behind each eye and forward from the stark-white ringtail. The Epaulette Surgeonfish is known to quickly change coloration from light to dark during courtship, aggression, or to indicate it is receptive to nearby cleaners.

In its natural habitat, the Epaulette Surgeonfish is generally found schooling in small groups along reefs or in clear-water lagoons. A 250 gallon or larger aquarium with plenty of water movement, large amounts of live rock to provide both plenty of swimming room, and territories within the live rock is necessary.

Although surgeonfish will eat meaty foods along with the other fish in the aquarium, it is important that they are offered plenty of marine based seaweed and algae. This will strengthen their immune system and improve their overall health. Offer dried seaweed tied to a rock or use a veggie clip, and feed at least 3 times per week. Sea Veggies, Seaweed Salad and Seaweed Selects are all ideal products and are very easy to use. These are great fish for controlling algae in the saltwater fish or reef aquarium.