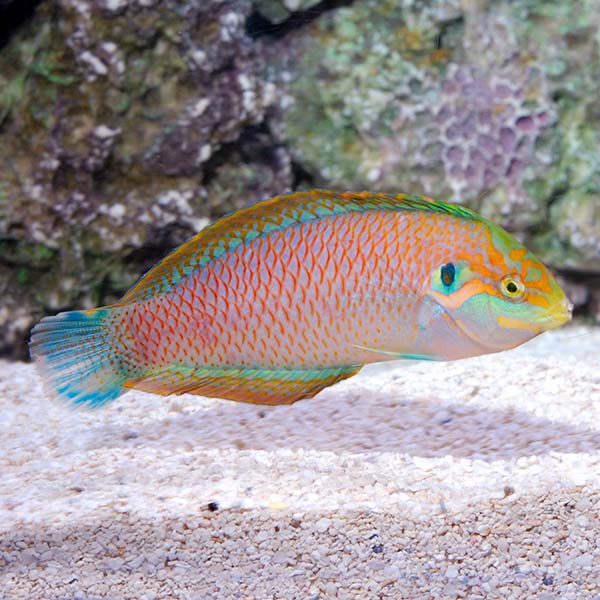 A 50 gallon or larger aquarium with well-established live rock and a mature sand bed several inches deep is recommended. The Kuiter's Leopard Wrasse is a sand wrasse that burrows into sandy substrate for protection. In the wild, Leopard Wrasses inhabit sand and rubble regions near coral reefs. To best recreate this habitat, be sure to provide large open spaces that allow access to the fine sand bed. The use of a wavemaker to simulate water movement near reef zones may also be a consideration. The Kuiter's Leopard Wrasse will do best when introduced as juveniles in groups of three or more. It eats small invertebrates (foraminiferans and amphiopods) that grow on live rock.

Write a Testimonial | Ask Customer Service
Mark M Lincoln , NE
Have had one going on 6yrs now in a FOWLR 72gal. It would only eat frozen brine for 1-1/2yrs then finally started eating variety of pellets including Formula 2. The fish is very active and swims the entire tank. It has been with a seagrass wrasse and they get along ok but the Kuiters is dominate. Also the Kuiters has been with other leopards and it is dominate overtime and actually starts harrassing them so not recommend putting with other leopards. Overall this fish is a real gem ! It loves to pick at live rock also. Though have had a long time the one i have has remained female, so they must not always turn male colors, however the female colors are very nice with diamond pattern.
1-1 of 1 testimonials