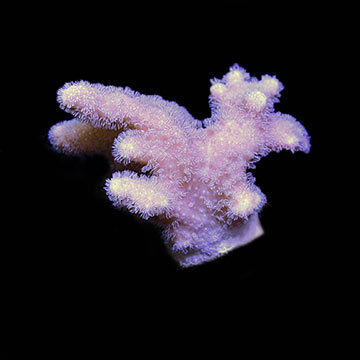 The Aquacultured Fuzzy Lobo Lobophytum Coral is a new release soft coral from Oceans, Reefs & Aquariums (ORA®) also referred to as Devil's Finger, Leather Coral, or Lobed Leather Coral. It is very difficult to identify an exact species because there is so much variation within the genus. It is closely related to corals of the Sarcophyton genus, and especially with small colonies, it is almost impossible to differentiate between the two. This stunning specimen is unique for its "insanely" yellow colored polyps.

Its behavior is peaceful, but it will still require space between others and itself within the reef aquarium. Some species are toxic to stony corals. It is very easy to maintain in the reef aquarium and makes an excellent coral for the beginning through expert reef aquarist. The Loco Lobo Lobophytum Coral will require medium to high lighting combined with medium to strong water movement. For continued good health, it will also require the addition of iodine, strontium, and other trace elements to the water.

The Loco Lobo Lobophytum is mounted on an aragonite block that can be placed easily and securely in or between the rockwork in the reef aquarium.