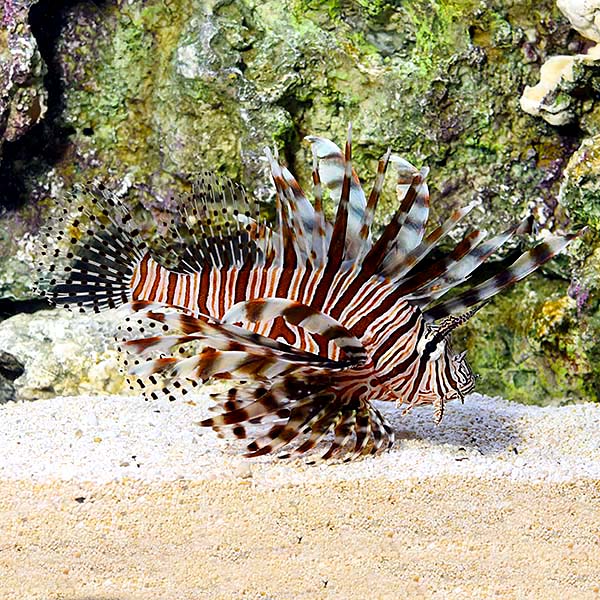 The Volitan Lionfish is also known as the, Common Lionfish, Red Lionfish, Turkeyfish and Butterfly Cod. It’s coloration can vary depending on the age and maturity of the fish, displaying a red to burgundy, white, and brown to black vertical stripes along the length of the body. It also has large, fan-like pectoral fins, and tall, banded spines on the dorsal fin. The Volitan Lionfish is very similar to the Miles Lionfish with the exception of their origin as the Miles Lionfish species is restricted to the Indian Ocean: Red Sea, South Africa, and east to Sumatra. The Volitain Lionfish differs from the visually similar Miles Lionfish, as Miles have fewer spines on its dorsal and anal fins.

The Volitan Lionfish can grow rapidly to an adult size of 15 inches, and when full grown these fishes should be housed in a 120 gallon or larger aquarium with numerous hiding places. It will hide while acclimating to its new home, but then is generally found out in the open. It may eat smaller fish, shrimp, and other crustaceans in the tank.

When first introduced into the aquarium, live saltwater feeder shrimp should be used to entice this fish to eat. Its diet should include meaty foods such as live shrimp, live fish, and occasionally crustacean flesh. Once fully settled into the aquarium, with some diligence and patience, Volitan Lionfish can convert over to consuming a prepared diet consisting of chunks of fresh, uncooked table shrimp, frozen silversides, and pieces of frozen squid.

Write a Testimonial | Ask Customer Service
Michael C. Huntsville , AL
This is a wonderful fish for an "aggressor" tank. I have mine housed with a Panther Grouper and Yellow Tang, and they all get along. Though your fish may demand live food (guppies are easiest) in the beginning, you should teach it to take other foods such as krill or pieces of large marine shrimp. It doesn't take long, and is actually healthier for it than feeding it freshwater guppies. The Lionfish gets to know its owner and looks forward to feeding time.
Jerimiah Z Denver , CO
The Volitan Lionfish is beautiful fish but should be handled with great care and caution and it shouldn't be housed in anything smaller than a 125-gallon tank. It should be taught to take frozen krill, shrimp, silver slides, etc.
Bethany B Porterville , CA
I have a black and white Volitan Lionfish and he is wonderful. He is very lazy and mellow, but adds great beauty to the tank. He gets along great with my other non-aggressive fish and looks forward to me feeding him. He is a great addition to our tank.
Bobby B Lakeworth , FL
This beautiful fish is very unique. I keep it with my Niger Trigger and a clownfish and they all get along well. When I lift the tank lid it comes to the top ready to eat.
Zackary B Hazard , KY
I absolutely love my lionfish! "Leo" is an extremely hardy eater. I have a 55-gallon tank with two Snowflake Eels, two damselfish, and a Volitan Lionfish. Although I advise: don't put damsels with lions! "Leo" ate my yellow-tailed damsel! He may be small, but he has an extremely large appetite!
Glenn B Fort Worth , TX
This Fish is awesome. I have a 3" Volitan Lionfish and he is very lazy. He does not like a strong current. He rests on rocks or on the sand but when it is feeding time he comes alive.
Jose D Key Biscayne , FL
My lionfish does not move a lot, but is the highlight of my aquarium. This fish rules the aquarium and always tries to eat fish that are half its size and smaller.
Dave S Feeding Hills , MA
I purchased a Volitan and it is the talk of the tank. My Lionfish, "Elvis" was a blessing to receive. It readily accepts all frozen foods, loves Mysis Shrimp and shows no aggresion to the other tank mates. He loves to perch on my tank terraces and has been seen in an inverted stance near the corner of my 55 gallon. A true beauty and I highly recommend it to beginners! A true SHOW PIECE!
Mike F Aurora, , IL
This fish is awesome! I have one and it is full grown. I house it with a Panther Grouper, a Humu Picasso Triggerfish, and a Black Edge Moray Eel and they all get along great. My lionfish is extremely lazy but he is the centerpiece of my aquarium. LiveAquaria.com is the best place to buy fish ever - thanks for all of your help and your great service.
Kyle G Brighton , MI
I love my Volitan Lionfish. He is in my 90-gallon tank with a Yellow Tang, Black Damsel, Huma Huma Trigger, Moon Wrasse, and Grouper. Be careful, they grow very fast and he ate a Blue Damsel. I would add him last and he should be the smallest fish in your tank.
Justin H Auburn , IN
I bought 10 fish from LiveAquaria.com and this one is my favorite - a must have. All my fish are very healthy. LiveAquaria.com is a great place to order from. 110% satisfaction!
Arman M Lakewood , CA
My Lionfish arrived in perfect condition and adapted to me very well. Thank you Live Aquaria for this wonderful and resourceful website. I love this fish and website!!!
David K Bourbonnais , IL
I have two Volitan Lionfish in with eleven other fish, one is 12” long and the other is the smallest fish in the tank at 8”. The smallest is the grumpiest. I have a bat fish about 16” in diameter and every fish moves out of his way except the small Volitan Lionfish. He snaps at the bat fish when he tries to push his weight around and will not move an inch. These fish are great additions to my tank and are a joy to watch.
Josh B Rutherford College , NC
I got my lion fish about a year ago and he is about maxed out n size he grew very fast and is beautiful. They will eat anything they are offered and are not that aggerssive. they just cant have any fish with them that will fit in theyre mouth. they are perfect for fish only aquariums and thats about it.
1-14 of 14 testimonials