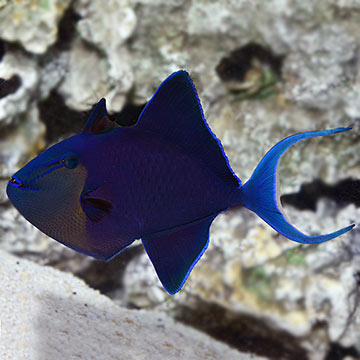 The Niger Trigger or Redtooth Trigger is a striking fish for the home aquarium. The exact color of the Niger Triggerfish varies in this species of fish, and can also change from day to day between purple, blue and blue/green with a striking, lighter blue highlight on the fins and long tail lobes. The color temperature of the lighting also plays a role in the coloration of any fish in the home aquarium. As an adult, they acquire bright red teeth, and are normally dark purple in color with a blue/green highlight around their face making them quite interesting to watch when they eat.

The Niger Triggerfish requires a 180 gallon or larger aquarium with rocks and caves for hiding, and may rearrange the landscaping and rocks. It vocalizes using a "grunting" sound. They are a great active fish for the more aggressive, fish-only display.

The Niger Triggerfish needs a varied diet of meaty foods including; squid, krill, clams, small fish and hard shelled shrimp to help wear down their ever growing teeth.