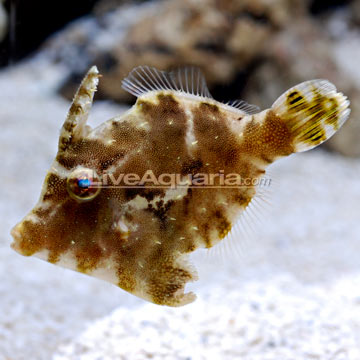 The Aiptasia eating Filefish is also known as the Bristletail Filefish, Matted Leatherjacket, Tomentosus Filefish, or Matted Filefish. The body is a mottled green, brown, and tan coloration.

It is a shy fish, and rarely aggressive towards other fish except those of its own genus. It is best suited for aquariums 30 gallons or larger that does not contain small invertebrates.

The Aiptasia eating Filefish is known to eat Aiptasia anemone in the home aquarium, but normally nips at soft and stony corals as well. The diet should include shaved shrimp, squid, scallop, mysis shrimp, freeze-dried krill soaked in a vitamin supplement, and frozen marine algae. The Matted Filefish should be fed small quantities of food several times per day.

These fish have been known to spawn in captivity, and males are normally large than the females, having fine bristle-like hairs on each side of their body down the caudal peduncle or base of the tail.

Write a Testimonial | Ask Customer Service
Danny B Duluth , GA
I highly recommend this very cool & unusual fish for controlling aiptasia. Very fun to watch, it will change colors and can move each eye independently - much like a chameleon. It has not bothered any of our corals, which are mainly LPS and softies, and has cleared out all aiptasia from 2 tanks.
Amethyst S New York , NY
Love this guy. Has a methodic style of swimming and surveying his environment that is most amusing. True, it's draw of the luck for each specimen to live up to its reputation but I've been blessed, he cleared up the pests in 3 days.
John K Malibu , CA
Bought one of these for an aiptasia problem, but soon came to appreciate this fish for its unusual form and disposition. Mine started eating aiptasia within a week (when I started noticing them disappearing) and nearly finished them off (those I could see, and likely many more in the rockwork I couldn't) within a few months. But one day I noticed a large colony of blue zoanthids missing - just some nubs on the rock. And then a couple days later I noticed a colony of prized Darth Maul zoanthids missing. That is when I found out filefish can be lightning fast swimmers when they want to be; took a week of daily attempt to catch him. He is now happy in a 100 gal. sump with lots of rock, and eats about everything I offer. He is a gregarious fish, always interested in what is going on outside of the tank - reminds me of a flame hawkfish that way. Now I control the aiptasia with a colony of peppermint shrimp. One or a few shrimp didn't do it, I ended up getting 20 (120 gallon with lots of rock). But the filefish is a great addition to a tank even without an aiptasia problem, unless yours develops a taste for slow-growing and expensive zoanthids.
Ester Herbert Harvey , LA
Im glad I bought this ugly fish. It has quite a character for such a small fish. It'll swim backwards, forwards and even upside down. Amusing to watch. Its not a picky eater, pretty greedy in fact. If you like a fish with personality, buy this.
Christian L Ypsilanti , MI
This is a strange and unusual fish. It's a slow mover, and moves like a helicopter. I bought it to control aiptasia but it almost seems afraid of the, It just goes to show you that some fish don't live up to reputation. If you are buying it to control aiptasia I would recommend asking if your particular file fish has been eating aiptasia.
Joe C San Mateo , CA
Brought a bonded pair. Did not touch any Aiptasia, but love my toadstool leather :( Great job of clearing up the toadstool leather. Hopefully, they will learn to eat Aiptasia...
1-6 of 6 testimonials