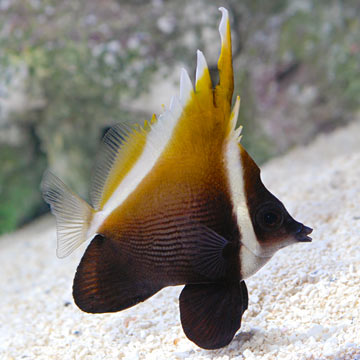 The Heniochus Brown Butterflyfish, also known as the Humphead Bannerfish, has a dark brown head and body. It has a narrow white band behind the head to the breast and a diagonal white band from the dorsal fin to the base of its tail. The forehead has a hump and there is a curved horn over each eye. Members of the Heniochus genera are often called Bannerfish instead of Butterflyfish.

The Heniochus Brown Butterflyfish may reside in a 125 gallon or larger aquarium that has a rocky aquascape with overhangs or caves for shelter. The Heniochus Brown Butterflyfish may be kept in pairs if both are introduced to the aquarium at the same time. It will acclimate better if tank mates are small, docile fish. It will nip at sessile invertebrates including corals.

Its diet should include herbivore preparations and a variety of meaty items.