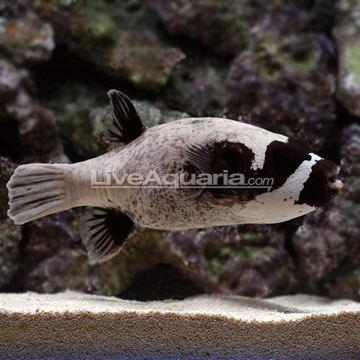 The Panda Puffer, also known as the Masked Pufferfish, has black patches around both eyes. It lacks pelvic fins, but has learned to use the pectoral fins to move about the aquarium. It has the ability, when threatened or alarmed, to inflate its body to almost twice its normal size. While "puffed up," its spines are held straight out from the body to discourage others from trying to eat it. Parts of the flesh are poisonous if digested. Its teeth are actually a fused beak-like structure.

A 180 gallon or larger, fish-only aquarium with a good protein skimmer is suitable. It will eat invertebrates found in a reef tank. It does become alarmed when in a net and will expand its body for protection, therefore, use a container to transfer it.

The Panda Puffer needs a varied diet of meaty foods including; squid, krill, clams, and hard shelled shrimp to help wear down their ever growing teeth.

Write a Testimonial | Ask Customer Service
Eric Riggs New York , NY
I owned a Panda Puffer for 5 years! He was kept in a 120-gallon tank with a big Koran Angel and assorted small, fast reef fish. This was the most enjoyable fish I have ever kept! It developed a distinct personality, and could recognize me when I walked in the room. I found it to be quite hardy, and it ate anything I introduced - especially gold fish! The front teeth grow quite rapidly and can become a problem. You need to keep plenty of coral for the fish to chew on - this keeps them trimmed. If you don't, teeth can grow to interfere with eating. This, however, means that nice coral will not look that way for long - a small drawback for the amount of pleasure you will get from this fish!
1-1 of 1 testimonials