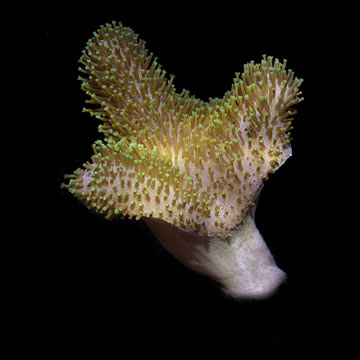 The Green Polyp Leather Coral is referred to as Sarcophyton Coral, Mushroom, Leather, or Trough Corals. This particular strain has a cream colored base with bright green polyps. As they grow older, they develop a folded appearance.

The Green Polyp Leather Corals are relatively peaceful, but adequate space should be provided between them and other corals in the reef aquarium. Some can produce toxins which are harmful to other reef inhabitants. Toadstool Mushroom Leather Corals require medium to high lighting combined with medium to strong water movement. For continued good health, they will also require the addition of iodine, strontium, and other trace elements to the water.

Culturing by the experienced hobbyist is often accomplished by cutting off a portion of the coral's crown and attaching that piece to live rock or placing it in the sandy bottom of the reef aquarium.

It is shipped attached to a small piece of rock.

Write a Testimonial | Ask Customer Service
Jeff [City Not Selected] , MD
I actually purchased this aquacultured green toadstool from LiveAquaria about 5 months ago. When I got it, it was about 2 inches in diameter. It arrived in great shape and was fully opened within hours of acclimation. It is still doing great and is growing much faster than I expected (a good thing!) and is now almost 5 inches in diameter. You can't go wrong with this one. This is an incredibly beautiful, and hard to find, coral.
Betty [City Not Selected] , ID
I got mine 11 days ago and he has been out since the moment I acclimated him. He also hasn't slimed over yet. Nice specimen!
1-2 of 2 testimonials