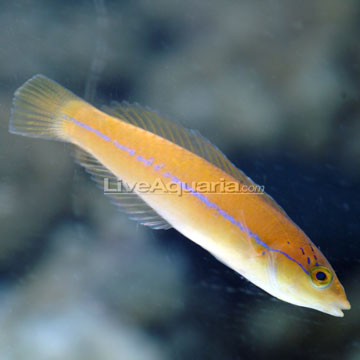 The Neon Wrasse, also known as the Yellowhead Wrasse, is one of the easiest wrasses to identify in every color phase. Adults have a golden to yellow head, a black vertical bar behind the tip of the pectoral fin, merging with a broad black area on the upper side, continuing to the top of the caudal peduncle and upper caudal fin and blue underneath. Juveniles are yellow with a turquoise-blue stripe along their sides. This color-changing characteristic makes the Neon Wrasse a fun and fascinating fish to observe in your marine aquarium.

In the wild, the natural range of the Neon Wrasse is concentrated in the Western Atlantic including the Bermuda and southern Florida to southern Brazil. The Neon Wrasse is a reef-associated species, common on shallow and deep reefs as well as rocky ledges.

The ideal setup for the Neon Wrasse will be a well-filtered, established saltwater aquarium of at least 75 gallons in size with a tight-fitting lid. To best recreate a natural reef environment for your Neon Wrasse, aquascape liberally with live rock, providing ample nooks and crannies for your Neon Wrasse to explore, seek refuge, or forage for food. Be sure to include a large area of open substrate as well as open spaces for swimming. A sandy substrate layer 2-3 inches in depth is essential to provide shelter for the Neon Wrasse as it burrows into the sand for the evening or when frightened. House the Neon Wrasse with other peaceful wrasses, including members of its own species. The Neon Wrasse is peaceful towards other fish, but are territorial, bordering on aggressive with conspecifics, so it is best to keep one Neon Wrasse per aquarium.