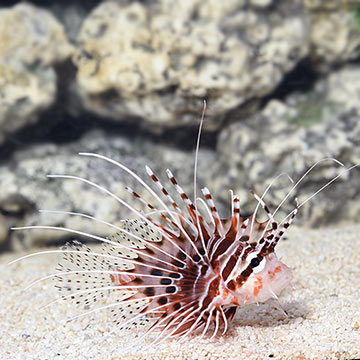 The Antennata Lionfish, also known as the Ragged-finned Firefish or Spotfin Lionfish, has red, white, and black vertical stripes along the body. Its most striking feature is its large, fan-like pectoral fins and tall, quill-like dorsal fins, lacking connective tissue, giving them a spiny look.

When first introduced into the aquarium, live saltwater feeder shrimp should be used to entice this fish to eat. After acclimating the diet should consist of meaty foods such as live shrimp (including ornamental shrimp), live fish, and sometimes, crustacean flesh.

Write a Testimonial | Ask Customer Service
Andrew W Lemont , IL
I just received my Indo Pacific (medium) today. I am just about to put it in my newly cycled tank. Just looking into the bag this fish is beautiful! very calm, and larger than i had expected. I will report back in a few weeks to let you know how he/she is doing!
Heather Z San Jose , CA
I love this little guy! Beautiful!! They don't really swim much, just perch on the LR. I have mine with a Fiji Blue Devil and they are fine together. I have had the Antennata for about a month now and getting him to eat anything but live food is difficult. I hope eventually he will eat something frozen.
Heather Z San Jose , CA
It's now been several months that I have had this fish. Grows fast (but hasn't hit the 7" size yet. Its about 4 1/2" now). I have since moved it into a community tank (clown goby, lawnmower blenny, ocellaris pair, tomini tang, mandarin, Fiji blue devil, purple firefish, fire shrimp, assorted hermits and an emerald crab) and everyone does fine. It literally ignores everyone. I have gotten it onto frozen and it will only eat what is presented on tongs. Won't touch anything dropped into the tank or if it falls off the tongs it will wait for me to pick it up and feed it. I can't say this is how docile ALL antennata's will be but this fish is truly not the big, bad predator I assumed it would be. Gorgeous animal!!
1-3 of 3 testimonials