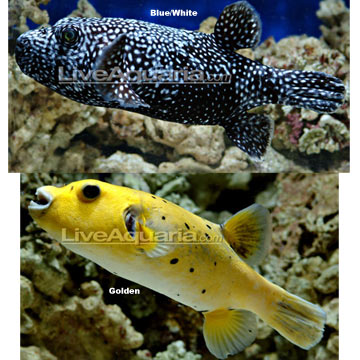 The Arothron Puffer is a fish of many names including Spotted Puffer, Guinea Fowl Puffer, and Golden Puffer. It changes appearance during different stages of its life. While in the black phase, it is deep blue to black with white spots over the entire body. There is a mottled phase in which the body is patches of yellow and patches of the black and white speckled pattern. The third phase, called the Golden Puffer is yellow. It very rarely changes phases while living in an aquarium.

A 125 gallon or larger, fish-only aquarium is suitable. It will eat invertebrates found in a reef tank. It becomes alarmed when in a net, therefore, use a container to transfer it.

The Arothron Puffer needs a varied diet of meaty foods including; squid, krill, clams, and hard shelled shrimp to help wear down their ever growing teeth.

Write a Testimonial | Ask Customer Service
Jeremiah F Dillon Beach , CA
I love this fish! He is quite personable. He is, however, quite a messy eater. But I wouldn't trade mine for anything, he is my favorite fish and always has been since I bought him.
Robert O Buffalo , MN
We bought the beautiful female Arothron Puffer from Liveaquaria a few year ago. If you are looking for a fish as a really pet, get this fish. She acts just like a puppy. She always need full attention from us. When it is a feeding time, she comes in the surface and spits at me. All of my family always talks to her like people do to a dog. She loves a table shrimp and mussel. We bought hundreds fish from Liveaquaria for the last seven years. I bought two Arothron Puffers, one male golden and female blue/white. I would say the Arothron Puffers are the best fish among all others.
1-2 of 2 testimonials