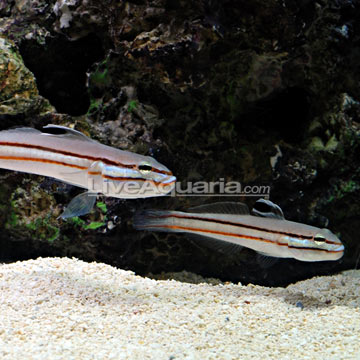 The Sleeper Railway Glider Goby originates among the rubble zones surrounding the reefs of Sri Lanka. It is white in coloration with two distinct black and orange horizontal lines extending the length of the body. The dorsal fin is black-edged, giving it a dramatic look. It is a very timid fish that makes a great addition to a reef aquarium and will aid in maintaining the sand bed.

It should be housed in a 30 gallon or larger aquarium with a fine to medium sized sand substrate. The Sleeper Railway Glider Goby uses shallow burrows in the substrate as refuge, keeping the substrate well oxygenated. It rarely becomes aggressive towards other fish, but is territorial, and will fight with its own kind unless they are a mated pair.

The Sleeper Railway Glider Goby feeds off the bottom as it sifts through the sand. Its diet should include a variety of frozen brine and mysis shrimp, bloodworms, and prepared foods for carnivores. It should be fed at least daily.