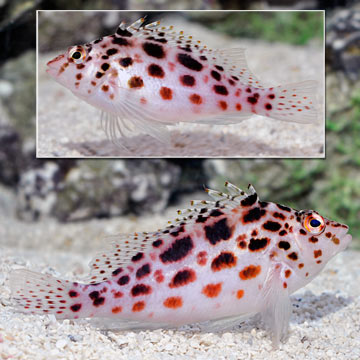 A 30 gallon or larger aquarium is acceptable for this hardy and aggressive fish. It will harass small, peaceful fish and most any other fish that is introduced to the aquarium after it has become established. Its tank mates should be larger than itself and at least semi-aggressive. It will eat small fish and crustaceans.

The Pixy Hawkfish diet should include a variety of marine meats, frozen preparations, and live feeder shrimp.

Write a Testimonial | Ask Customer Service
Bryan Butler Havertown , PA
Very interesting fish. I love watching him stalk around the tank. He seems to perch in the oddest places. He has taken a liking to my algae blenny and they seem to pal around perching next to one another. very hardy and good eater. He doesn't seem to bother any of my other fish (semi-aggressive tank).
Jovan Cinco Clermont , FL
Bold and brave attitude, fights with my bi-colored Damsel. Will look at you with it's eyeballs rolling, walks on rocks, and is a good eater. Adds life to my already lively tank. Like it's personality.
1-2 of 2 testimonials