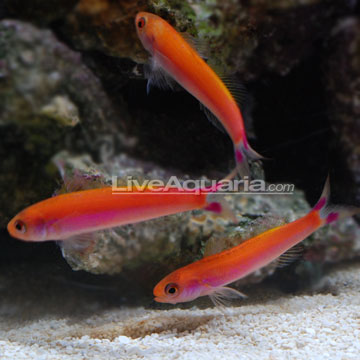 The Slender Whitleyi Anthias, also known as the Magenta Slender Anthias, occurs in large numbers among relatively deep water (65ft and greater) reefs in nature. They have a very slender body that is magenta in color with yellow fins. Their caudal fin is split, and some refer to anthias of the Luzonichthys genus as splitfins. The anthias within this genus do not differ in coloration between the male and female, making them difficult to distinguish. They are a very peaceful, and at times a shy fish, that will not harm other fish or invertebrates in the home aquarium. The Whitleyi are challenging when first introduced into the aquarium because of their shy and reclusive behavior, but once adjusted to the aquarium are quite hardy.

An ideal aquarium for the Slender Whitleyi Anthias is a 55-gallon or larger marine aquarium with plenty of live rock for feeding and hiding. These anthias will not harm invertebrates and are well suited for any type of reef aquarium that contains relatively passive fishes. They enjoy being in numbers of 5 or more which seem to give them a sense of security, and should ideally be the dominant anthias species in the display, and added prior to the introduction of larger or more active fishes. Do not house these anthias with aggressive or overactive fish, as this will more than likely cause them to contiguously hide and never feed. Most importantly they should not be housed with larger and more active and aggressive Anthias species.

Anthias species all share the trait of being hermaphroditic. If a dominant male perishes, the largest female of the group will often morph to take its place. Although because of the similarities in coloration, it is difficult to tell the difference between the sexes.

Once acclimated to a new aquarium, Anthias do best when fed a varied diet of frozen mysis shrimp, enriched frozen brine shrimp, and over time may eat high-quality flake foods offered in small quantities throughout the day. An attached refugium cultivating copepods and amphipods provides a steady supply of nutritious live food sure to keep this active planktivore content.